One’s own identity is constructed in dialogue with others. Hence, can one speak for oneself about oneself? This video creates a portrait emerging from messages of others, which have been captured as screenshots over the course of the last few years by the artist: An incomplete mashup of chats on Grindr & advices on Co-Star.
Daten
Kunst
LGBTQIA2S+
The Human Touch
Film
English
Off Stage

Messages on dating apps, personalised advertisements on social media, recipes found on websites, a recap of my taste in music over the year, and emails that were sent to me serve as a somewhat insufficient overview which questions self-authenticity and representation.

The script of the video solely stems from a patchwork of screenshots which unintentionally creates a personal narrative, allowing the viewer to empathise—despite the uncanny appearance of the character which guides viewers through a web of digital abstraction.

"Looking back on when we first met I cannot escape and I cannot forget Baby, you’re the one
You still turn me on
You can make me whole again

Recommended titles based on your interests are: ‘Burn-out is not only caused by stress’ as well as ‘Getting rid of panic attacks and other anxieties’.

Hey dear Lukas, a few problems and questions already appeared... It is time to stop talking about how you’d like to get well and just start. Try not to think yourself into a hole today." 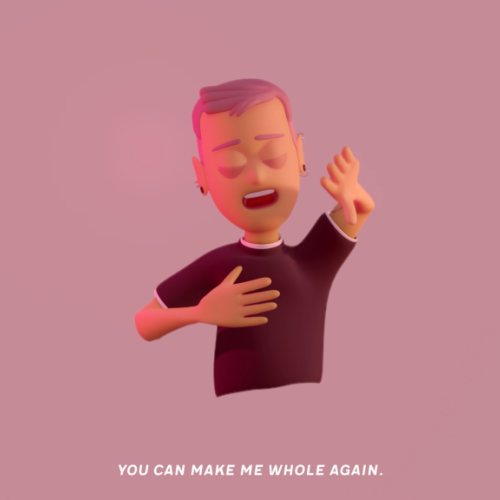