#rp22 Speaker James Beacham: At the other end of a black hole

29.04.2022 - Particle Physicist Dr. James Beacham discusses the cutting edges of science and technology and the fabric of our reality at re:publica.
Image 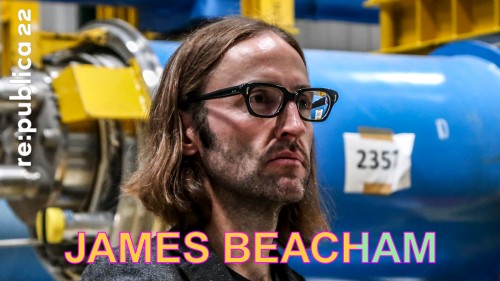 James Beacham is a physicist working with the Large Hadron Collider (LHC) at CERN near Geneva, where he searches for answers to physics' biggest open questions. As a member of the ATLAS research group, one of the teams that discovered the Higgs boson in 2012, he hunts for dark matter, gravitons, quantum black holes and dark photons. In addition to his research, he is a frequent speaker at well-known science, technology and arts events around the world—including the American Museum of Natural History in New York, Royal Institution in London, Guggenheim Bilbao, SXSW and the BBC. His TED talk "How we explore unanswered questions in physics" has been viewed more than 1.6 million times to date. He is frequently heard and seen on podcasts, radio shows, television series and documentaries, and has been featured in the New York Times, Wired and Gizmodo. James is also an experimental filmmaker and regularly collaborates with various artists. In 2015 he launched Ex/Noise/CERN, a project exploring connections between particle physics, experimental music and film.

We were already looking forward to James Beacham at #rp20—until the pandemic hit. We are therefore especially happy to announce him as part of the programme for #rp22!

What topic will you be talking about at #rp22?
What would happen if you fell into a black hole? Would you be vaporized? Crushed into a point? Stretched into spaghetti? Or would you emerge at the other end to a new world—perhaps a new universe? I’ll be exploring the cutting edges of science and technology and what happens when the fabric of reality—physical or societal—gets twisted beyond recognition, and what this means for you, now and in the future.

What have you missed out on in the past two years and think is in urgent need of a reboot?
The most urgent thing that needs to be restarted is our collective knowledge that what connects us is much, much stronger than what separates us. There are multiple, fierce, malevolent entities—war-mongering dictators in Europe, fascist politicians in the U.S. and around the globe, union-busting tech billionaires who want to colonize the Moon and extract its resources for profit, queerphobic and misogynistic loud people everywhere, blockchain cultists who are attempting to turn all of culture and all of existence into financial instruments in an enormous Ponzi scheme—who have taken advantage of the pandemic and global geopolitical events to foment tribalism on multiple levels and to try to convince the entirety of humanity that we are all in zero-sum competition. They're doing this not from any objective set of moral principles but because it provides them and their allies with money and power. We need to restart our recognition that every single human is, at the most fundamental possible level, a collection of particles that are little excitations in the exact same quantum fields that permeate all of space, throughout the universe. We are all part of the same earth, the same solar system, the same galaxy, the same universe, and to cultivate humility, compassion, empathy, and radical connection.

The motto of #rp22 refers to the last line of the Queen song "Bohemian Rhapsody". Which song do you think should definitely be included in a karaoke session at #rp22 and why?
"Complicated" by Avril Lavigne. Why?

You fall, and you crawl, and you break
And you take what you get
And you turn it into honesty
And promise me, I'm never gonna find you fake it