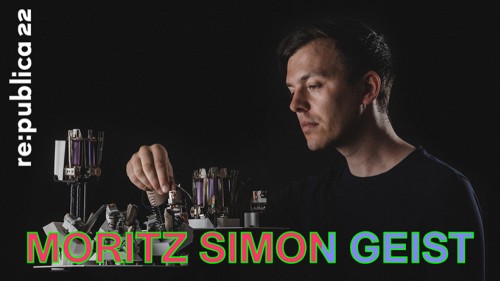 „It doesn’t get geekier than this.“ Jon Parales once wrote in the New York Times about the performances of Dresden-based media artist, engineer and robot musician Moritz Simon Geist.

As a musician who is also a robotics engineer with expertise in prototyping technologies and 3D printing, his "band" on stage consists of abstract installations of various DIY robots.
Since 2004, Moritz has been constantly developing new ways of making electronic music by experimenting with different elements and technical tinkering with, for example, discarded electronic components and 3D-printed parts.

From 2015-2020 Moritz taugth on the progression of technology and society at the NYU Berlin, Clives Davis Institute.
His robotic instruments and performances have been shown at various European festivals and exhibitions throughout the last years and have won numerous international awards.
For a first impression of his work and sound installations, check out this episode of arte Tracks or this post on Moritz's YouTube channel.

We are looking forward to Moritz's performances at re:publica 22 and have asked him three questions beforehand.

What can we look forward to in your performances at #rp22?
Making music with synthesizers is so 2010—in 2022 all the cool kids are working with robots and AI composition tools! So on Friday, my companion Portrait XO and I will turn the main stage into an experimental field for electronic sound—without electronics—in three 15-minute performances. Or at least with little electronics. In any case, with lots of robots, laboratory atmosphere and AI speech synthesis. Came for the gadgets - stayed for the music!

What have you missed out on in the past two years and think is in urgent need of a reboot?
Playing online concerts was the hot shit—like, twice, maybe. But after these few years of pandemic, I really want to play live in front of an audience again—so I can hug people after the concert or get beer bottles thrown at me. Both is better than another two years of on-screen concerts.

The motto of #rp22 refers to the last line of the Queen song "Bohemian Rhapsody". Which song do you think should definitely be included in a karaoke session at #rp22 and why?
I think your song selection is great and I'll definitely sing along! Even without having committed a murder!