26.04.2022 - The award-winning Turkish author, journalist and political thinker presents her manifesto against inequalities and ignorance in modern society.
Image 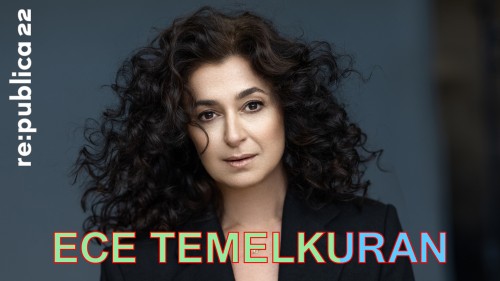 Since graduating with a law degree from Ankara University in 1995, Ece Temelkuran has been known for her numerous award-winning novels, non-fiction books and political columns in various daily newspapers. Her works appear in the Guardian, the New York Times, Le Monde and Der Spiegel, among others.
In order to escape possible repression, Ece Temelkuran has been living in exile since the end of 2016, like many other Turkish journalists who criticise the policies of Turkish Prime Minister Erdoğan.

In her book "Together", she calls for us to devote our energy to paying relentless attention to those in power and the destructive systems that sustain them, rather than wasting time spreading anger and outrage on the internet. Her digital communication project lettersfromnow.com ties in with this very idea. In addition to weekly messages written personally by Ece on current moral and political issues, her online platform provides space for a community of politically interested people with regular meetings and exchanges.

Her latest book "Wille und Würde" ("Will and Dignity") deals with our political and social present and is an optimistic guide to action in ten steps for a return to more humanity in our world.

On Twitter, Ece Temelkuran writes in English and Turkish about her current projects and thoughts.

What topic will you be talking about at #rp22?
Will and dignity.

What have you missed out on in the past two years and think is in urgent need of a reboot?
Randomness. The online meetings stole from us the inspiring coincidences that are only possible when we interact in physical space. This issue will become important as the Metaverse will be taking over our communication. The physical should not become an antiquity.

The motto of #rp22 refers to the last line of the Queen song "Bohemian Rhapsody". Which song do you think should definitely be included in a karaoke session at #rp22 and why?
"I did it my way" by the Sex Pistols or "I will survive" by Donna Summer. :)