25.05.2022 - We look forward to hearing from the expert on data protection and human rights in the field of digitalisation, new technologies and social change.
Image 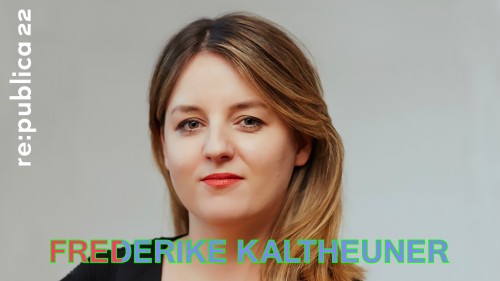 Frederike Kaltheuner is a tech policy analyst, researcher and advocate for justice in a world made of data. From 2019-2020 she was a public interest Tech Policy Fellow at the Mozilla Foundation. Since June 2020, she is also the fund manager of the European AI Fund, a philanthropic initiative to strengthen civil society in Europe. Previously she was a Director at the London-based NGO Privacy International, where she led the organisation’s work on corporate surveillance. Her team’s technical investigations into the murky world of online advertising have led to statutory inquiries by regulators, and caused some of the world’s most downloaded apps to change their practices. Frederike recently became Director for Technology and Human Rights at the international NGO Human Rights Watch.

As a policy expert on emerging technology Frederike has been invited to give expert evidence in the EU parliament, the House of Lords and the Belgian Federal Parliament. She regularly comments on emerging technologies in the international press and has given TV and radio interviews for AlJazeera, CNBC, BBC World News, Tagesschau, Deutschlandfunk, WDR5 and BBC Radio 4’s Today programme, among others.

In 2018, her book "Datengerechtigkeit" (Data Justice) was published, which she wrote together with Nele Obermüller. This was followed by her anthology "Fake AI", published in 2021 by Meatspace Press, in which the various authors deal with the false promises of our often hyped AI future.

We are looking forward to discussing the topic of artificial intelligence, the hype and the social impact with Frederike Kaltheuner on stage at #rp22 and have asked her three questions in advance.

What topic will you be talking about at #rp22?
Since January, I have been running (and setting up) the newly founded tech department of Human Rights Watch. There is no time for anything else right now. But I am very happy to talk about my book "Fake AI", a collection of essays on the topic of pseudoscience.

What have you missed out on in the past two years and think is in urgent need of a reboot?
So much! Encounters, especially unplanned ones. I miss my conference friends whom I have seen again and again at different events over the years.

The motto of #rp22 refers to the last line of the Queen song "Bohemian Rhapsody". Which song do you think should definitely be included in a karaoke session at #rp22 and why?
"Get Off the Internet" by Le Tigre.