01.04.2022 - We are excited to see the sustainability policy & transformation research expert and co-founder of #Scientists4Future on the re:publica stage again this year!
Image 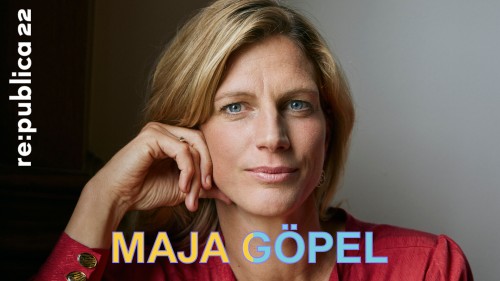 "The irreversibility of the change of ecological systems in their regeneration has, I believe, simply not yet been realised."
With this statement, Professor Maja Göpel concisely underlined the urgency of the climate crisis at the Federal Press Conference in March 2019. Since then, the "Scientists for Future" initiative, an association of scientists from all disciplines that she co-founded during this period, has been drawing attention to the challenges of the global climate, biodiversity and sustainability crisis.

As an honorary professor at Leuphana University Lüneburg and a member of various organisations and committees, including the Bioeconomy Council of the German Federal Government, the International Club of Rome and the World Future Council, Maja Göpel specialises in science communication and deals with transformations towards a sustainable society.

Her bestseller “Unsere Welt neu denken” ("Rethinking Our World") from 2020 will be followed this year by “Wir können auch anders” (“We Can Do It Differently”). In the book, which is about social transformation processes, she wants to encourage new thinking and explains how scientific findings can be used for a better world.

At re:publica 2019, Maja Göpel was represented in two panels—one together with Harald Welzer and one on the topic of "New movement(s) for climate protection". She was also a speaker at "re:publica in digital exile" in 2020.

We are happy to be able to continue the dialogue with Maja Göpel at #rp22 and have prepared three questions for her.

What topic will you be talking about at #rp22?
System Change: The Dance between Decay and Emergence.

The motto of #rp22 refers to the last line of the Queen song "Bohemian Rhapsody". Which song do you think should definitely be included in a karaoke session at #rp22 and why?
"This Girl is on Fire" by Alicia Keys, because it states a powerful 'Nevertheless' and we see especially young women all over the world, who not only want to stand their own ground in the growing chaos, but give everything to avert that chaos.