28.05.2022 - Get angry! Ciani-Sophia Hoeder and Monique Scheer talk about anger and the construct of femininity at re:publica.
Image 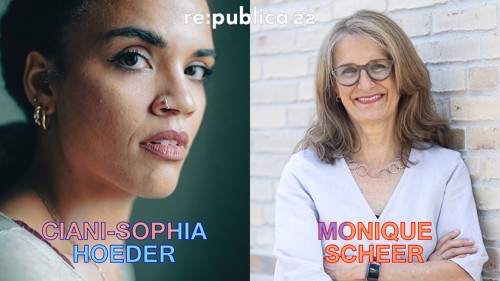 Anger demonstrates who is considered "valuable" in our society. When a person we respect is angry, we tend to listen to them and take them seriously. Thus, expressing anger without risking social consequences is a privilege. Not every person can afford to do that. Anger is not an individual issue, but a structural one. Recognising that there is a differentiation between female/male, white/black anger and many more is not enough. We need an overall societal change.
As a society, we need to cultivate empathy for each other's anger and be angry on behalf of people who structurally have no access to being heard with their concerns.

This is what the author, freelance journalist and founder of RosaMag magazine, Ciani-Sophia Hoeder and the professor of Empirical Cultural Studies at the University of Tübingen, Monique Scheer, want to discuss on stage at #rp22 from different perspectives.

In preparation for their session, we invited them for a short interview.

What topic will you be talking about at #rp22?
Ciani-Sophia: The supposedly unpopular emotion—anger. This emotion has a bad image, but it can move mountains. It has ensured that women can vote today, that trade unions exist and that apartheid ended. Anger changes the world. We all feel it. It's just that anger is perceived differently. This ensures that the people who can express anger—without fearing social consequences—have power and those who cannot are controlled. What does it say about our society that we inhibit so many people from expressing protest?
Monique: We also talk about Ciani-Sophia's great book. I am a cultural historian and have been researching the history of emotions for many years. That's why I want to take this look at female anger: At what point are women no longer allowed to show their anger? What is the historical context of this development? What was before? What could be in the future?

What have you missed out on in the past two years and think is in urgent need of a reboot?
Ciani-Sophia: There is strength in community, so I am happy to come together and to talk again. Change of perspective and connecting.
Monique: I am not sure that we need so much restart in the sense of resuming. Since March 2020, we have experienced that suddenly things were possible that were previously considered impossible. We should keep this openness and use the chance of the new beginning!

The motto of #rp22 refers to the last line of the Queen song "Bohemian Rhapsody". Which song do you think should definitely be included in a karaoke session at #rp22 and why?
Ciani-Sophia: "Sympathy for the Devil" by the Rollings Stones. A classic.
Monique: "Bohemian Rhapsody" is one of my all-time favourites. I also love "California Dreaming" because I often dream of this, my second home.