17.03.2022 - The author, journalist and editor at SPIEGEL will talk at #rp22 about her experiences with reporting on #MeToo issues.
Image 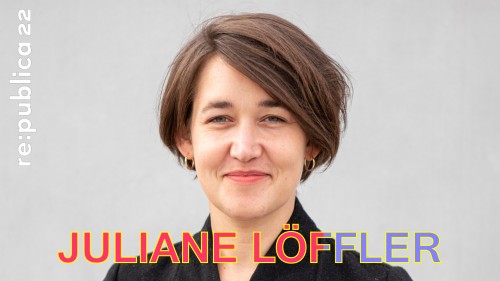 As a senior reporter at Buzzfeed News and a member of a team at "Ippen Investigativ", Juliane Löffler helped uncover the abuse of power and affairs of ex-"Bild" editor-in-chief Julian Reichelt last year. The results of the research were published in the New York Times and SPIEGEL, where Juliane has recently started working as an editor. The subsequent dismissal of Julian Reichelt and the reports on the corporate culture at Springer Group caused a resurgence of #MeToo discourse in Germany.

We look forward to continuing these discourses with Juliane at re:publica 22.

What topic will you be talking about at #rp22?
The challenges of #MeToo reporting.

What have you missed out on in the past two years and think is in urgent need of a reboot?
A buzzing, more analogue newsroom and fewer screens: I'm really looking forward to that!

The motto of #rp22 refers to the last line of the Queen song "Bohemian Rhapsody". Which song do you think should definitely be included in a karaoke session at #rp22 and why?
I am not a good singer, so I will leave it to others to make proposals.