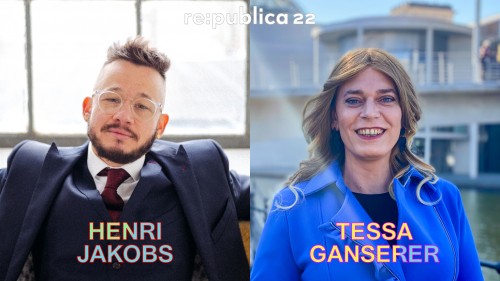 Already during his electric bass studies at the Richard Strauss Conservatory and his music journalism studies at the University of Music and Theatre in Munich, Henri Jakobs was a member of numerous music projects. Fans certainly know him as the singer and bassist of his own band TUBBE or as the live bassist of Sookee. Then in 2021 he released his first solo EP, "Bizeps, Bizeps".
But you may have seen Henri recently as an actor and bass player at the Schaubühne Berlin in the play "The Life of Vernon Subutex" (Daniel) or heard him as a voice actor in the Netflix production "Ridley Jones" (Dante).
Henri had his transition from 2018-2019 accompanied by the author Christina Wolf in the podcast "Transformer". He was also on stage with her at re:publica 19 on the topic "Language with asterisks: Talking about trans*". He continues to be active in trans*activism because an awful lot of things upset him.

Tessa Ganserer, member of the Bundestag for Bündnis 90/Die Grünen, was the first trans* woman to sit in the Bavarian State Parliament from 2013 to 2021, where she was, among other things, the queer policy spokesperson for the Greens. Since last year, she has served in the German Bundestag as a member of the Committee on the Environment, Nature Conservation, Nuclear Safety and Consumer Protection and as a substitute member of the two committees on Food and Agriculture and Health.
Tessa described the transsexual law, which has already been partially declared unconstitutional, as a violation of human rights and has been fighting for a long time for it to be replaced by a self-determination law. As the first trans* woman in the German Bundestag, she has been the focus of numerous radical right-wing and Christian conservative campaigns.

We are looking forward to Tessa and Henri's joint session at #rp22 and have asked them three questions about it.

What topic will you be talking about at #rp22?
Henri: I will speak [together with Tessa] about the representation of trans* issues in the media.
Tessa: I will bring the topic "My gender - my human right".

What have you missed out on in the past two years and what do you think urgently needs a new start?
Tessa: In the last two years, interpersonal relationships have been neglected. Vulnerable groups usually suffer the most from extreme situations like the Corona pandemic, including the queer community. Policies have often focused only on the "nuclear family". Elective families, which are more common among queer people, were often not considered. Counselling facilities or queer centres as "safe spaces" were closed. Not only did this affect people directly, but it also meant that queer organisations lost funding opportunities. CSDs as moments of empowerment to draw strength for everyday life did not take place in some cases and thus there were no occasions and opportunities to draw attention to our concerns. On the other hand, inhuman hatred against queer people in general and trans* people in particular has increased. Especially in the social media, hate is sprayed that poisons our society. We therefore need a new start for social interaction, how we treat each other as human beings. And for this we need an action plan for acceptance and diversity.
Henri: Good handshakes for greetings definitely fell short. Greetings in general. Social interaction was definitely bumpy and sporadic. Thinking would benefit from a reboot after all this time.

The motto of #rp22 refers to the last line of the Queen song "Bohemian Rhapsody". In your opinion, which song should definitely not be missing from the karaoke at #rp22 and why?
Henri: "Dancing On My Own" by Robyn, because it's the best song ever written. I said what I said.
Tessa: You're asking the wrong person because I can't sing at all. But if I had to choose, it would be "Walk on the Wild Side" by Lou Reed. This song from the early 1970s is a tribute to the trans* women around Andy Warhol's Factory in New York in the late 60s. The song has captivated me since my early teens and for so many years I couldn't tell anyone why.