15.03.2022 - The comedian, moderator and podcaster will be on stage at #rp22. Introducing him in our 3-question interview!
Image 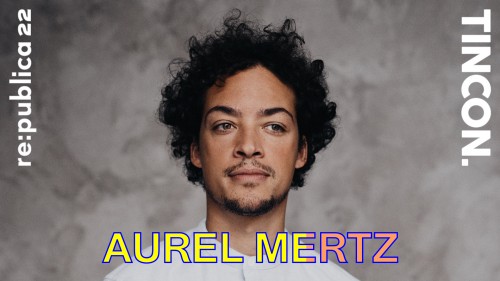 Comedian, presenter, podcaster, actor, producer... Since he launched his first Late Night Show on Tele5 in 2016, the Frank Elstner Masterclass graduate has come a long way. Most people will probably know Aurel Mertz as the face and co-author of the funk format "AURELORIGINAL". The satire show was promoted to the ZDF media library last year and, according to Aurel's own information, is "described by various German Interior Ministers as subversive to the state".

You can find Aurel's satirical comments as a sitcom on Instagram, or as Tweets. He also regularly comments on the state of the world or his own life in his current podcast "Aurels Alarma Pyjama".

We are looking forward to seeing Aurel on stage at #rp22 and had three questions for him.

What topics or projects are you working on at the moment?

What have you missed out on in the past two years and think is in urgent need of a reboot?
Private life has been somewhat neglected. Not necessarily the time you don't spend working, but the time when you experience something new and worth talking about. Apart from that, of course, everything that requires many people to be together. Professionally, of course, performing on stages, and privately, getting wasted in clubs, festivals and at open airs. So any form of physical gathering needs a reboot.

The motto of #rp22 refers to the last line of the Queen song "Bohemian Rhapsody". Which song do you think should definitely be included in a karaoke session at #rp22 and why?
Elton John – "Rocket Man". I started singing that song out loud every morning on my birthday because I identified myself as a Rocket Man long before Elon Musk, Jeff Bezos and Kim Jong Un did.