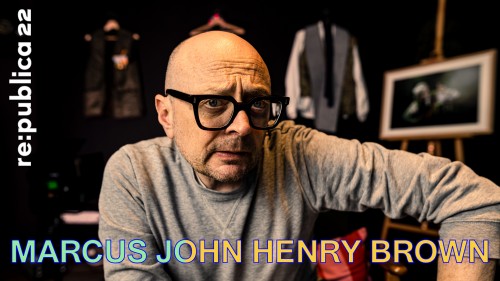 Performance artist Marcus John Henry Brown has been familiar to keen participants from the stage of re:publica for many years. His brilliant one-man plays explore the relationships between and impact of technology, culture and commerce on society. For #rp20, he planned to perform his long-form poem "A Wicked Pack Of Cards"—then the pandemic hit. At #rp21, he built on this with #HUSTLETOLOGY: A wild mix of mythology, fake religion, performance art, the nonsense of the modern business world and the dark corners of LinkedIn.

After recording his performances in the studio for the last two years, Marcus will finally return to the stage for #rp22 and follow up on these last two years with "The Hustle Royale".

We are really looking forward to his performance this year, which can finally take place in front of a live audience again, and have asked Marcus three questions about his plans.

What have you missed out on in the past two years and think is in urgent need of a reboot?
The Pandemic-Years have been hard for us all. I’ve really missed performing in front of a live audience. It almost broke my soul. That’s why the audience plays such a major part in The Hustle Royale. I really can’t wait to see them all again.
I think we urgently need to reboot empathy. We need a little less politics, a whole load less capitalism, zero war and 100% more love.

The motto of #rp22 refers to the last line of the Queen song "Bohemian Rhapsody". Which song do you think should definitely be included in a karaoke session at #rp22 and why?
“Find me somebody to love” by Queen because there’s so much for both the singer and the audience to do. And because it’s an absolute banger.