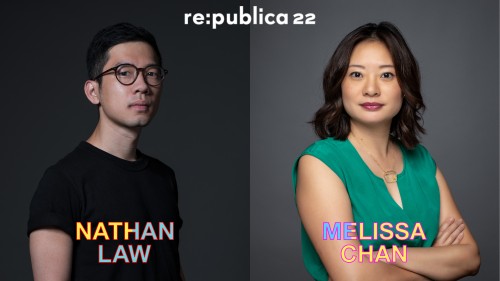 As Secretary General of the Hong Kong Federation of Students, Hong Kong politician Nathan Law campaigned for free elections during the 2014 protests. Two years later, alongside Joshua Wong, he was one of several founders and the first chairman of the political party "Demosisto", which campaigned for Hong Kong's independence from China until its self-dissolution in June 2020.
For his involvement in the 2014 protests, Nathan was sentenced to eight months in prison by the Hong Kong judiciary in 2017. Following a renewed wave of protests in Hong Kong in the summer of 2020, Nathan Law travelled to the UK, where he applied for asylum and has since been living. The decision on his approved asylum application led to political disagreements between London and Beijing.

Melissa Chan is an Emmy-nominated independent journalist living in Los Angeles and Berlin. Born in Hong Kong, she moved to the US with her family at the age of three. Reporting from various places around the world, she focuses on transnational issues, often involving China's influence beyond its borders as well as the rise of global authoritarianism. She is known for her articles in major newspapers such as The New York Times, The Atlantic, The Washington Post, Time or The Guardian. As a television journalist, she presented DW's news programme on Asia and reported from Europe as a correspondent for VICE News Tonight.
Melissa is included in Foreign Policy magazine's Pacific Power Index, a list of 25 people shaping the future of US-China relations.

Melissa Chan and Nathan Law will share the stage at re:publica to talk about Hong Kong and Chinese authoritarianism. We have asked them three questions in advance.

What topic will you be talking about at #rp22?
Melissa: I look forward to my conversation with Nathan. We will discuss his book, “Freedom: How We Lost It and How We Fight Back”, which include lessons drawn from his work in Hong Kong, his observations concerning Chinese authoritarianism, and how democracies around the world must come together to fight back against global authoritarianism—which is particularly relevant for Europe at this time.
Nathan: I will talk about my advocacy work on fighting for Hong Kong democracy and preserving democratic values. I will also talk about my book.

What have you missed out on in the past two years and think is in urgent need of a reboot?
Melissa: After two years of the pandemic, everything needs a fresh restart—whether it has to do with the future of work, building our personal relationships, travel, or the more pressing geopolitical and climate issues of our times. However, I personally look forward to the serendipity and surprise that comes with meeting random people and making new friends that can only happen in an organic manner when people are able to mingle freely again.
Nathan: I miss the opportunity that we can meet in person and understand each other beyond what is being portrayed on the screen. It's indeed important to establish personal interactions and how we can express ourselves after a long period of rather isolated time.

The motto of #rp22 refers to the last line of the Queen song "Bohemian Rhapsody". Which song do you think should definitely be included in a karaoke session at #rp22 and why?
Melissa: Keeping with the Queen theme, “We are the Champions” feels like an appropriate karaoke song for those of us privileged enough to have the opportunity for a post-pandemic restart!
Nathan: I think I will leave on the first day so I may not be able to join. But I like the song "Glory" by John Legend.