05.06.2022 - Journalist Aye Min Thant speaks at re:publica 22 about how the major online platforms are fostering digital illiteracy in Myanmar and around the world.
Image 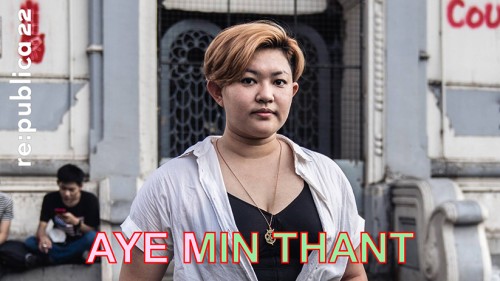 Aye Min Thant is a Burmese-American journalist and the features editor for Frontier Myanmar. Their work has appeared in the New York Times, Reuters, 1843 Magazine, and on Deutsche Welle. Aye won a Pulitzer Prize in 2019 as part of the Reuters team covering the Rohingya crisis and its aftermath.

At #rp22, she will talk about the spread of disinformation, information silos and hate speech in Myanmar and around the world, and how online platforms help to facilitate this development.

We are looking forward to Aye and her session "The Creation of 'Digital Illiteracy'" and have asked her three questions in preparation.

What can participants look forward to at your session?
I would love to discuss what I call the creation of the "digitally illiterate user", a creature that allows giant tech companies to externalise the risks of their business decisions onto the rest of the world. Instead of expanding slowly and with cultural and risk awareness, global tech companies have been rushing into what they see frontier countries only to be shocked and appalled when they are implicated in something like the Rohingya genocide in Myanmar. Then in their rush to absolve themselves of responsibility, they create this idea that the problem is that people from poorer countries or regions simply do not know how to use the internet safely or responsibility, and then make themselves look good in supporting civil society in digital literacy. They do this despite the fact that the same problems of disinformation, information silos, and hate speech that we see in countries like Myanmar are replicated (at different scales) in developed nations as well. Indeed the problem is not that the users are not using the platforms well, but that the platforms are fundamentally designed to reward harmful behaviour.

Was ist bei dir in den vergangenen zwei Jahren zu kurz gekommen und was meinst du, benötigt dringend einen Neustart?
We need to restart global connections and collaborations. The world is only growing more intertwined, and the dictators and authoritarians of the world are definitely learning from one another. As it becomes safer and safer to travel, the rest of us need to be utilising our greatest assets - each other - to arm ourselves in the fight to keep power in the hands of the people.

The Creation of "Digital Illiteracy": How Platforms Favour Disinformation and Hate Speech in Myanmar and around the World

Info
Pulitzer Prize winning journalist and features editor for Frontier Myanmar, Aye Min Thant, is going to speak about platforms and their creation of the"digitally illiterate user". She is going to focus on how this unfolds in Myanmar, but also how these dynamics replicate disinformation, information silos, and hate speech around the world.
Aktivismus
Empörung
Journalismus
media
Stage 4
09.06.2022 03:30 pm
– 04:00 pm
Lecture
English
Conference

Info
This Meet-up is intended for our international guests to meet some members of our local community, as well as for our Track Teams to meet each other.
Any Way The Wind Blows
society
Meetup Red
09.06.2022 07:00 pm
– 08:00 pm
Meet Up
English
Conference