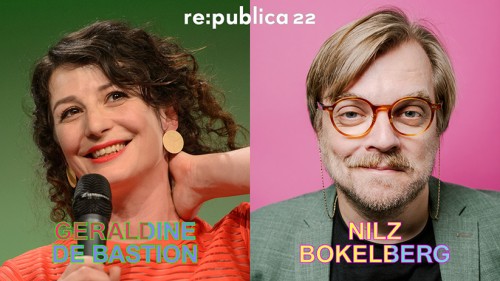 When we kick off the programme of #rp22 on Wednesday, 8 June, two people will come to stage 1 who will not only be familiar to experienced re:publica participants:
Geraldine de Bastion and Nilz Bokelberg will lead the programme for the three days of the festival on stage 1.

As a long-standing member of the re:publica curation team, Geraldine is very familiar with the programme and also has her own sessions in the programme. Together with Global Innovation Gathering (GIG) and the Federal Institute for Vocational Education and Training (BIBB), she will open the Makerspace on Day 1 and meet Claudia Kemfert for a discussion in the afternoon.

Nilz not only gained moderation experience at the age of 17 at the music station VIVA, he has also been part of re:publica since the first one and will probably be remembered by re:publica participants of previous years at the latest since the joint bingo sessions with Markus Herrmann. Nilz also has his own sessions in the #rp22 programme - including on his podcast "WiMaF".

We are looking forward to meeting Geraldine and Nilz and have asked them three questions in advance.

How do you prepare for #rp22 as stage hosts?
Geraldine: This year is my tenth anniversary on stage. In 2012, I was allowed to take over the programme management from Markus and after you never actually had time to see your invited guests, but spent most of the time of the event in the production office, I thought, why don't we in the programme team also take over the stage hosting, so you have a personal contact with your speakers and can also tell the audience better why you invited them. After two years of rpTV and rpRemote, I am very much looking forward to being on stage again with and in front of people and, as always, I am preparing myself by talking to our speakers, my colleagues in the programme team, reading a lot and choosing an outfit that matches the theme.
Nilz: I've been at re:publica since the beginning and have had sessions in the programme almost every year since the second edition. So the rp is a kind of home for me. So I'm all the happier to be able to give something more back this year and to do it side by side with, it has to be said, rp moderation legend Geraldine. And I'm happy to be able to bring the big entertainment gesture to the rp stage. For that, I do research a few days before the start, so that I know exactly who I'll have on stage. My hosting aspirations are best described as: "Wetten dass feeling with depth". My goodness. No one in the world has ever put it that way.

What have you missed out on in the past two years and what do you think urgently needs a new start?
Nilz: Being together. Toasting. But above all being together. And toast.
Geraldine: Lipstick.

The motto of #rp22 refers to the last line of the Queen song "Bohemian Rhapsody". In your opinion, which song should definitely not be missing from the karaoke at #rp22 and why?
Nilz: I've always wondered why "Don't stop believing" by Journey didn't become the rp signature song. But sometimes a crisp "Mamma mia, let me go" wins, other times a "The smell of wine and cheap perfume".
Geraldine: You can sing other songs for karaoke than Bohemian Rhapsody??!?