We need to talk about money: re:publica is getting more expensive. And cheaper. 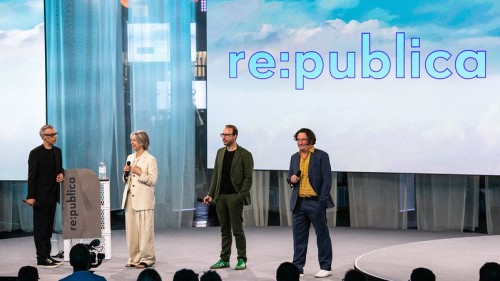 Everyone is saying this, but it's still true: We're living in hard times. Pandemic. Climate crisis. Wars. Political turmoil. And we are currently living in Germany, one of the places least affected by these global developments.

High inflation rates, rising food and energy costs. Looming poverty for those who already do not have enough, but also challenging times for those who have managed to stay relatively unscathed up to now. Heaps of unpredictable problems for those who are self-employed or run small to medium sized businesses.

Let us take a look at our own field, namely the event industry: Although many projects are being made possible again in 2022, small concerts and events are being canceled one after another, other event organizers are also struggling or have already had to give up - not enough affluent audiences with massively increased costs and the still existing deficit from the past two years: A bad combination. Larger events may still work here and there, but no one really knows what it looks like behind the scenes.

And how is re:publica doing amidst all of this? Well, to put it frankly: We have had better times.

By the time we had to cancel the rp20, which was more or less completely planned at the time, we had already sold a few hundred tickets and generated around 250,000 euros in revenue. This income later helped us - together with the official Corona aids and the first loan in re:publica history - through the event - and thus through the time without revenue. We thereby managed to support and keep our core team, but we are now in a completely different financial situation than 2019, when we could still finance re:publica entirely by internal means and weren´t dependent on outside investment and loans.

Of course, those 2020 tickets were still valid in 2022, but didn't generate any revenue for that season. Moreover, Corona caused hesitation and reluctance among potential guests. And after the event industry's two tough years in 2022, almost all the costs of producing an event like re:publica went up massively. 47% on average, in some cases by as much as 100%. Everyone has to see how they can recuperate the losses caused by the pandemic. Which is understandable, but incredibly expensive for organizers. Anyone who planned an event for the subsequent year in 2021 on the basis of the costs known up to that point was faced with an unforeseen, very cost-intensive new reality in 2022.

We responded to this situation by introducing all possible kinds of cost-cutting measures. And in the end, by doing so, we managed to fund the wonderful, and truly blissful rp22. Nevertheless, the saved costs had to be compensated, mainly by the team, which went beyond the limits with incredible dedication. And we say that an organizer who is used to very high stress levels.

But we can no longer go on like this. We can no longer remain uncertain until shortly before the event, anxious whether everything will work out. Burn ourselves out, our team and all the freelancers associated with us, and then, in the best case scenario, start from , without any perspective for somewhat longer-term planning (let alone for new project ideas), without a break, simply from scratch again. We need more people to be paid fairly, zero funds. We need some planning security, we need to have reserves for loans, hard phases or rising production and energy costs, we need money for new plans to achieve our content goals and to be able to continue investing in re:publica.

But this puts us in a conflict: On the one hand, we want to be as accessible as possible for the digital society, and we don't want to charge " conventional/normal" conference prices. In addition, we know that many of our guests are also suffering from the repercussions of the recession. On the other hand, we have a team and a large event to finance.

re:publica is no ordinary event. We are not a business meetup or a trade conference. We are not a trade expo, nor a startup-investor matchmaking event. Rather, re:publica is a civil society conference that has grown out of those members of the digital society dreaming about a better tomorrow and whose diversity of topics and guests is unparalleled in Europe, perhaps even worldwide. re:publica is not about finding the best contacts for the next deal. Instead, it's about exchanging ideas on all kinds of pressing issues, about different perspectives, about having a say, about the will to shape things, about developing new concepts. Last but not least, it's also about the old but increasingly pressing questions of how we can overcome crises, what present and future we envision, and how we actually want to live. Who we want to be. As individuals and as a society. And it's ultimately about democracy and discourse. And that's why re:publica is needed. To quote German Chancellor Olaf Scholz: "We need the the zeitgeist of re:publica."

In order to protect our organization, we need the support of those actors who are close to our hearts, but who also have their own interest in the long-term perseverence of re:publica. On the one side there are cooperations and partnerships, these are state actors and, of course, the city of Berlin. On the other hand there is also public and private media. On top of that are foundations and other non-profit institutions that are concerned about social debates on the effects/consequences of digitization. For these stakeholders, we are currently developing a concept that will include both, non-profit and commercial activities. With this concept we will invite the above mentioned actors in the coming months and with a long-term perspective to secure re:publica in the long-term.

But we also need the support of our visitors. Until now, the income from ticket sales covered up to 30% of the total costs of every annual re:publica, that was of course much less in 2022 due to the circumstances mentioned above. And we have to make up for that. This is why we have to significantly increase our ticket prices from 2023 onwards.

That being said, we will considerably lower the prices for the discounted tickets for recipients of welfare benefits, students, trainees, pensioners, and people with disabilities to make re:publica more accessible in other ways. The Early Bird ticket will start at 49 euros and then rise to 79 and 99 euros (rp22: 69 / 115 / 125 euros). With this step, we want to send a sign of solidarity to those who have the very least.

And of course there will still be the possibility to participate for free. Through signing up as a volunteer, you can support us for eight hours before, during or after the event. You will receive free access to re:publica for three days in return, and our sincerest gratitude, because with your commitment  - you  make an important contribution to the realization of the event. In addition, you have the opportunity to submit suggestions for the program of the upcoming re:publica with your own ideas as part of the Call-for-Participation.

We know that the price increase is unfortunate and that the timing could hardly be worse. We know that you are not better off than we are. And that your costs are going up just as much - with no change in revenue, at best. But we have to take the steps described above to increase the prices - not only here, but also in the cooperation with our partners. Otherwise, re:publica cannot continue to exist.

We thank you for your understanding, support and trust. We greatly appreciate it. You can be sure that the whole team will once more do everything they can to make re:publica the unique experience it should be in 2023, and always has been!