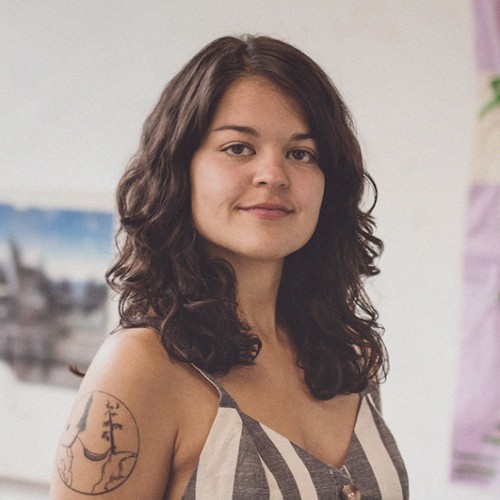 Andrea Garcia Vasquez was born in Edison, New Jersey from two Venezuelan immigrants in 1992. She began studying photography and painting in high school and was accepted to the School of Visual Arts in New York City for an undergrad degree in Photography. After two years she switched her Major to what would be her BFA in Visual & Critical Studies in 2014. In 2015, SVA granted her a 6 month scholarship to live and work in the LIA Artist in Residence Program in the Baumwolle Spinnerei which led her to later take part in other residencies (such as Pilotenkueche, Can Serrat in El Bruc, Spain, and Entstehung einer Künstlerischen Tatsachen in Jena). Meanwhile, she continued her academic career in the Art Academy in Leipzig for a dimplom degree in Media Art. Since 2015, Andrea Garcia Vasquez has exhibited works in Germany, USA, Asia, and the Middle East with solo and two-person exhibitions in Beirut, Berlin, Leipzig, and California. Her writings and artworks have been published in several magazines and publications. She won 5th place with a Jury Award for the Olympia Art Competition in Tokyo in 2017. She continues to live and work as a freelance artist in Leipzig, Germany today. In February 2020 she graduated from the HGB Leipzig with a Diplom Degree in New Media: Installation and Space with Prof. Joachim Blank with honorable distinction. She was a recipient of the DENKZEIT stipend from the Culture Foundation of Saxony in 2020, the Project Stipend from Cultural Offices Leipzig (Kulturamt) in 2021, the project stipend from he Cultural Foundation of the Free State of Sachsen (KdfS) for three months in 2022, as well as 5 month Kick-starter Stipend recipient from the Kunstfonds Foundation in 2022. Andrea Garcia Vasquez is teaching Textile Arts and other artistic techniques on a freelance basis since 2018. She organizes and runs the local artist collective now known as Contemporary L.A.R.D- an international monthly meeting group where art critiques and studio visits take place every last Sunday. Since 2020, Garcia Vasquez has been an active member of Kombinat e.V. in Halle 14, Spinnerei, Leipzig. She gives tours of the Baumwolle Spinnerei in English and works on a honorary basis in the Archiv Massiv on grounds.