05.05.2022 - The Australian publicist, composer, producer and AI scientist is back at re:publica.
Image 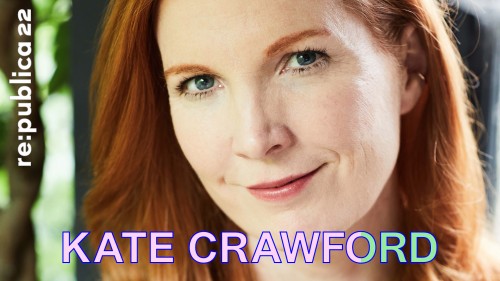 Professor Kate Crawford is a leading international scholar of the social and political implications of artificial intelligence. Her work focuses on understanding large-scale data systems in the wider contexts of history, politics, labor, and the environment. She is a Research Professor of Communication and STS at USC Annenberg, a Senior Principal Researcher at Microsoft Research New York, and an Honorary Professor at the University of Sydney. She is the inaugural Visiting Chair for AI and Justice at the École Normale Supérieure in Paris, where she co-leads the international working group on the Foundations of Machine Learning. Over her twenty year research career, she has also produced groundbreaking creative collaborations and visual investigations.

Her project “Anatomy of an AI System” with Vladan Joler won the Beazley Design of the Year Award, and is in the permanent collection of the Museum of Modern Art in New York and the V&A in London. Her collaboration with the artist Trevor Paglen produced “Training Humans” – the first major exhibition of the images used to train AI systems. Their investigative project, “Excavating AI”, won the Ayrton Prize from the British Society for the History of Science. Kate's latest book, "Atlas of AI: Power, Politics, and the Planetary Costs of Artificial Intelligence" highlights the hidden costs of artificial intelligence—from natural resources and labor to privacy, equality, and freedom.

Through her numerous past participations, Kate Crawford can rightly be called a re:publica regular. We are looking forward to welcoming her on stage again at #rp22!

What topic will you be talking about at #rp22?
“ROCKS, FACES, FLESH: A Political Ecology of AI”. My talk looks at how AI has become the extractive industry of the 21st century. We will explore the impacts of large-scale computation on the environment, personal data, and human labor globally. I'll share some of the field sites that I've visited around the world, from lithium mines to Amazon warehouses to Jeff Bezos' rocket base, to map the planetary costs of AI that are usually hidden from public view.

What have you missed out on in the past two years and think is in urgent need of a reboot?
Too much to list here!

The motto of #rp22 refers to the last line of the Queen song "Bohemian Rhapsody". Which song do you think should definitely be included in a karaoke session at #rp22 and why?
Given I'll be talking about artificial intelligence, I'd suggest a classic: "Don't Believe the Hype" by Public Enemy.