03.06.2022 - The journalist, translator and moderator brings new perspectives from the German media scene to the re:publica stage.
Image 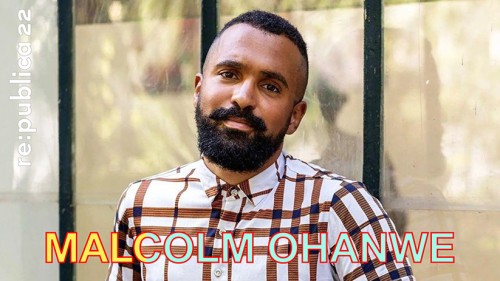 TV presenter on the ard-alpha programme "RESPEKT", host on the SWR podcast "Sack Reis - Was geht dich die Welt an?", reporter for the BR programme "Zündfunk", cameraman, reporter and author for the ZDF political programme #trending and the foreign journal, host, editor and producer of the funk podcast "Kanackische Welle", translator of the book "Mask Off" (German title: "Sei kein Mann") by JJ Bola and currently translating the book "The Antiracist Kid" by Tiffany Jewell...

These are just some of the latest projects Malcolm Ohanwe is currently working on.
We are all the more pleased that he has found the time to once again discuss and present urgent topics such as gender images in journalism or new German perspectives in the podcast landscape on the re:publica stage.

In preparation for his sessions at #rp22, we asked Malcolm three questions.

What topic will you be talking about at #rp22?                                        I'm presenting two sessions at re:publica 22. I'm giving a keynote about my research into the experiences of journalists who have been accused of lacking professionalism because, for example, they have a lisp, are too effeminate, too "chavvy" or otherwise fall outside a norm of what some elites consider respectable and serious. I also curated a panel on new German perspectives in the podcast world. When we started with our now funk podcast "Kanackische Welle", there weren't many podcasts dealing with society beyond a white German perspective, now there are countless! Besides re:publica, I'm currently writing a non-fiction book about masculinity, editing a foreign reportage for SWR, hosting a great new programme for arte and also working on my first documentary film. I'm also translating my second book! So a lot going on.

The motto of #rp22 refers to the last line of the Queen song "Bohemian Rhapsody". Which song do you think should definitely be included in a karaoke session at #rp22 and why?
DEFINITELY BRANDY'S ALBUM "FULL MOON". It is the building block for a lot of the biggest and most successful pop music we hear today. I had to painfully learn that one of the most successful rappers of our time named Jack Harlow, didn't even know who she was. That's a shame. Every musician needs to be familiar with Brandy's voice!!!!!!