The re:publica Mentors are back!

27.05.2022 - For #rp22, we have once again been able to engage a diverse group of long-time re:publica participants to support "newbies" and take them by the hand. Questions? #AskTheMentor!
Image 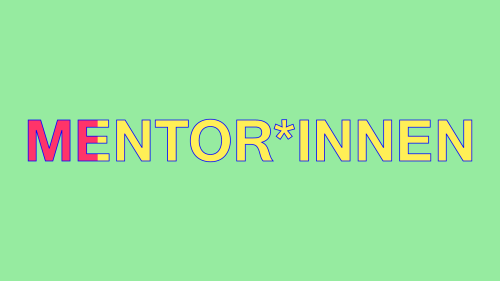 Our community is constantly growing and we especially want to show those who are attending one of our events for the first time what re:publica is all about. For this reason, we launched the Mentor Programme in 2019 and brought experienced re:publica participants together with "newbies" to make it easier for them to find their way around the event and become part of the community.
The feedback was overwhelmingly positive, so we had already planned to continue and expand the re:publica mentor programme for #rp20.
However, then came the pandemic and for the next two years, re:publica took place exclusively online.

This year, we are all the more pleased that we were able to recruit exactly the same group of people as mentors for #rp22 who were all set to join us in 2020. People with very different areas of interest who are very familiar with the re:publica thanks to their numerous participations and who will tell the "newbies" their very personal tips and highlights on site and introduce them to the community. They will also answer questions from all re:publica participants posted on Twitter using the hashtag #AskTheMentor.

Mentor Meetups for Newbies on 08 & 09 June
During #rp22, there will be two meetups between mentors and interested newbies. These will take place on 8 June at 12:30 pm and on 9 June at 11 am at the re:publica "Home Base" in the main hall. From here, the mentors and interested newbies will set off on short tours of the grounds, take a look at the programme together, exchange ideas and experience their "re:publica community feeling" together.
Want to join? Just come to the Home Base stand at the time of the meetup, get to know the mentors, ask questions and connect!

#AskTheMentor
Don't have time for our meetups or missed them, but you still want to ask your question(s) and network with the mentors? Simply use the hashtag #AskTheMentor on Twitter to get engaged. You are also welcome to join the Twitter community "Mentor*innen re:publica 22" to network and exchange ideas.

The Mentors of #rp22 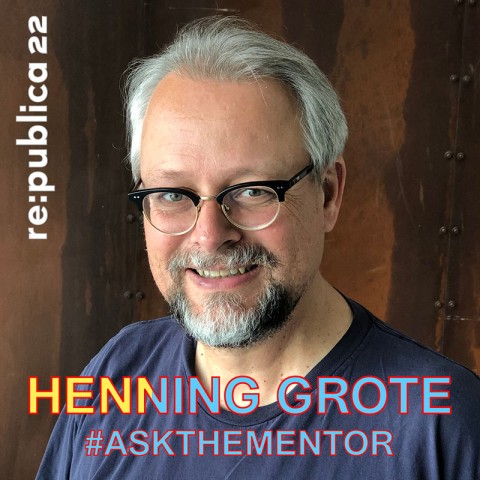 Henning Grote
UX professional Henning has been attending re:publica since the very first event and, as a mentor, wants to encourage the participants of #rp22 to get involved and participate.

"I met a lot of people at every re:publica event who I only knew from the web before. So I now know the real faces to many avatar thumbnails and have made many friends through re:publica. That's why re:publica is much more than a conference for me, it's a place that brings people together."

Thorsten Ising
Marketing and communication expert Thorsten has been with us since #rp12. He is podcast host of the Social Media Schnack Podcast and co-host of #d2mtalk, a live video talk format on how communication is changing.

"The re:publica community is special to me because it is so dynamic and yet so consistent in its basic characteristics. Honest, clear and unabashed. Neither closing itself off to difficult topics, nor to new people, participants or groups—instead always welcoming them into their midst and round." 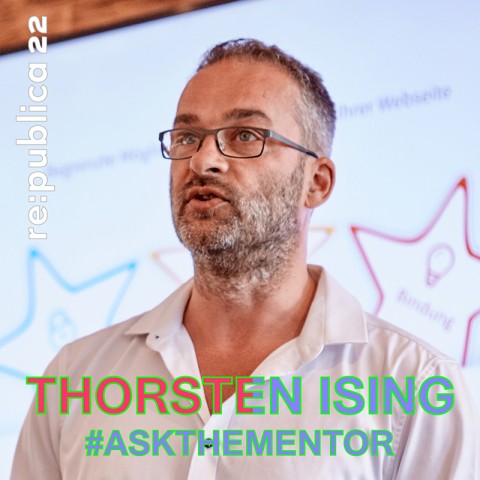 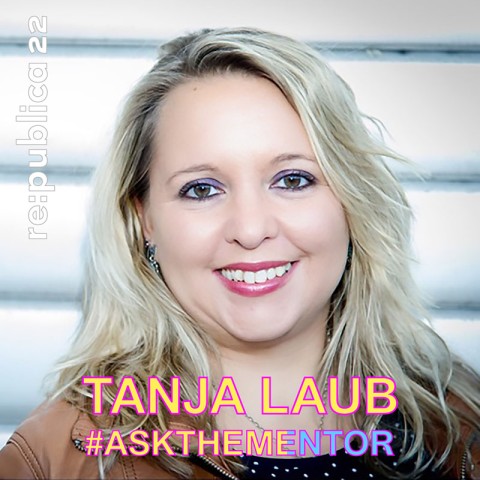 Tanja Laub
Tanja is a community strategist and will be attending re:publica for at least the sixth time. For ten years, she has been advising and training companies, associations, NGOs and agencies in all aspects of community management - from setting up corporate platforms, the dialogue with users and the job description of community managers. As a lecturer, she teaches at various universities and gives talks at international conferences.

"Onboarding is an important step to make new members feel comfortable in the community. Where do I find what, what is the right tone, how do I meet people? These are important questions and I would like to help the newbies with that."

Claudia Saar
Service designer and cultural manager Claudia can already look back on a decade of re:publica participation and has also been active as a helper behind the scenes several times. She loves digital innovations in culture and when the audience is not just a spectator but becomes active and also has lots of funny re:publica anecdotes for her newbies.

"Why is re:publica always one of THE best times of the year for me in Berlin? Because nowhere else in this form, in the diverse formats and on this scale do relaxed and innovative people come together to learn from each other and to exchange ideas." 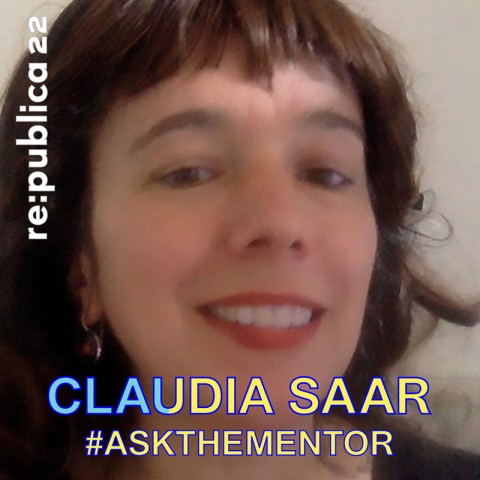 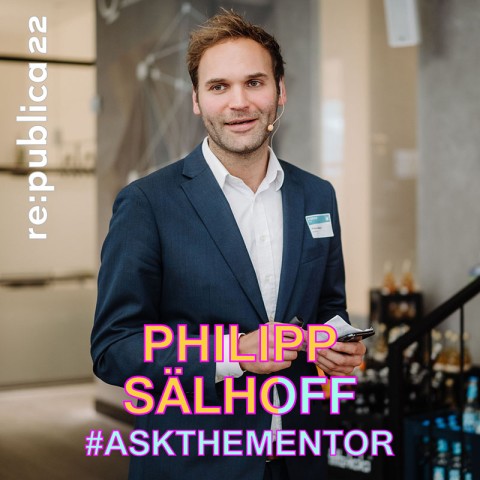 Philipp Sälhoff
Politics expert Philipp has not only been to re:publica several times in Berlin, but also to our Sequencer Tour event in Portland 2019. The Managing Director of the political consulting network Polisphere deals with the central transformations of modern politics—especially in the field of digitalisation and communication.

"Over the years, re:publica has become... THE instance for the digital zeitgeist in Germany and beyond. Even if you wander aimlessly around the area for three days, you take away more than in many "high-level events" on the other 362 days of the year. You meet everyone from long-lost primary school friends to your secret Twitter idol (both have happened)."

Sven Semet
Sven is good at networking both online and IRL and has been at almost every re:publica in the last ten years. As a mentor, he wants to share his experience and knowledge and introduce newbies to the special nature of social media at re:publica. "Any Way the Wind Blows" motivates Sven to believe more than ever in the "good in humanity" and to commit to a #BetterWorld through the global network.

"From year to year, re:publica is a super important platform to draw attention on the one hand to the risks, but much more importantly on the other hand to the opportunities we have as a society to keep this planet worth living on. With the mentees, I would like to share the motivation that—no matter how small the action—it is worthwhile to get involved for "people in need"." 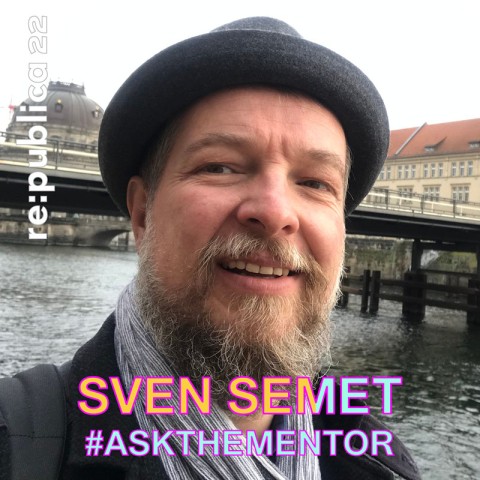 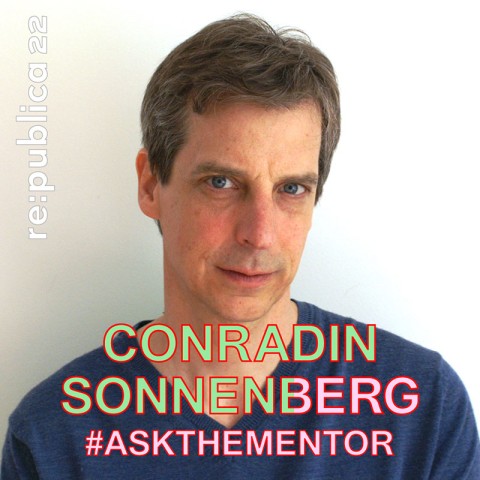 Conradin Sonnenberg
Even after 25 years in Berlin, you can still hear that Conradin grew up in Switzerland. In the late 1980s, Berlin's large construction site attracted architecture students from all over the world. Many stayed, no matter what profession they later worked in. Conradin as Creative Director in an advertising agency, which at that time still lived from poster campaigns and radio spots. When the tsunami of digitalisation overtook everyone and turned them into digital experts, he became creative director of a global creative platform. Ten years later, Conradin set up his own company, Open Creation Consulting, to offer his clients platform-independent creation and innovation projects in the digital space. After two years in a home office, his personal motto for #rp22 is: "Get out of digital cover, back into real life."
He is also looking forward to the new networking format .txt on the fourth day of re:publica.

"Through digitalisation, we have more opportunities to shape our (shared) lives than ever before. For me, the events at re:publica are a touchstone for whether and how we use this opportunity to reinforce outdated values such as egoism, power and profit, or whether we use them for the good of society and the world."

Philip Steffan
Philip has actually been part of re:publica since the first one in 2007—even actively as a "microphone helper" back then. And he hasn't missed a single event since then, even gaining a lot of experience as a speaker on the re:publica stages.

"The fact that I never miss re:publica has a lot to do with the community: for me, it's an exchange of up-to-date knowledge and a cosy class reunion in equal measure. Missing the beginning of the exciting keynote because you can't just walk through the courtyard and building without chatting with old and new acquaintances every ten metres—that's re:publica for me." 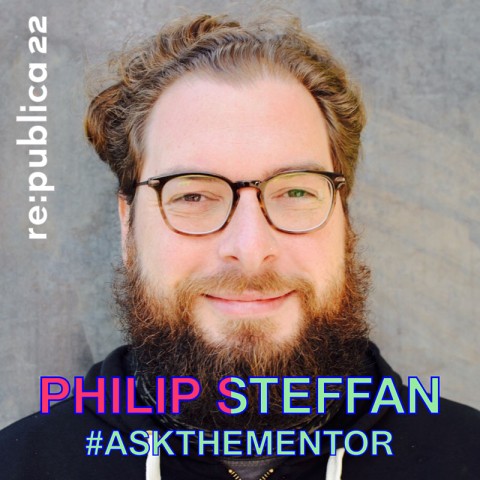 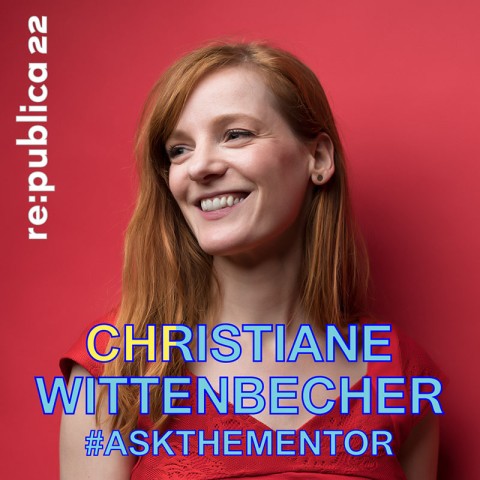 Christiane Wittenbecher
Christiane is a video journalist and has been a participant, reporter and speaker at re:publica. As an expert in the field of video, 360° and storytelling, she founded a video production company and has produced videos for Axel Springer and the public broadcasters, among others.

"I like the idea of really living out the networking idea that characterises re:publica. It's only networking when the many people who come together in one place actually talk to each other, discuss and exchange ideas. And hanging out in the courtyard, of course."

Ronald Zinke
Community Manager Ronald has been working for the Gay.de and Gaudi community for over 10 years, focusing on the best UX there is. When he is not online, he is part of the board of CSD Deutschland e.V. - the German Pride network that unites all Pride organisers. His main focus is on supporting the local LGBTIQ*+ community, promoting activism and engaging activists with a special focus on the Pride community. Equality is what he strives for. Everywhere. Ronald is a coffee junkie: talkative, inquisitive, spontaneous, direct and sometimes chaotic...

„But without chaos, u can’t change the world.“ 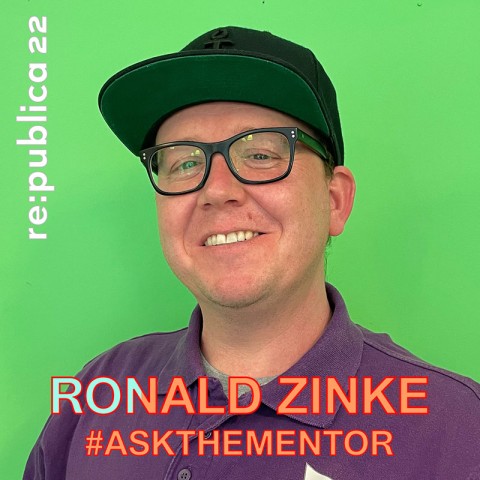