#rp22 Speaker Franzi von Kempis: A job like no other

04.05.2022 - The former head of Berlin's second largest vaccination centre talks about her experiences at re:publica 22.
Image 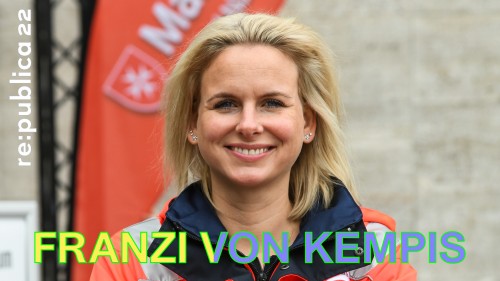 After Franzi von Kempis fell ill with Corona in early 2020 at a time when hardly anything was known about the virus and she had to deal with the side effects for weeks afterwards, she decided early on that she had to do something about the pandemic.
Originally, the former head of Daimler Mobility Lab only wanted to take a four-month sabbatical and help set up a vaccination centre for Malteser in Berlin at the beginning of 2021. But she soon found herself in the middle of the country's largest vaccination campaign as the new head of the vaccination centre and had to deal not only with HR issues, team motivation and setting up new vaccination routes, but also with the social discord, the conspiracy myths surrounding the pandemic and anti-vaccination activists.

The journalist and historian has been dealing with fake news for a long time now. Her YouTube channel "Besorgte Bürgerin" ("Concerned Citizen") was about false news and hatespeech online well before the pandemic. Her book "Anleitung zum Widerspruch" ("Guide to Objection"), published in 2019, provides well-founded arguments and facts against populist slogans, prejudices and bullshit.

The vaccination centre is now closed and we look forward to Franzi bringing her experiences and stories from this time to the stage of #rp22.

What topic will you be talking about at #rp22?
II'll be talking about vaccination. It's about a job that has never existed before. It's about vaccination centres, which were everything in this pandemic: Places of hope and bogeyman number one. It's about people who left their old jobs behind to get to work. Because they wanted to or had to. Who exchanged the cockpit for vaccination booths or turntables for educational forms and disinfecting pens.
I ran a vaccination centre in a global pandemic. I learned more in those two years than I had in the previous 20. About myself and about crises, about people and hope, about fears and defiance. My talk is about 9 big and small truths I learned along the way. And about a guinea pig called Max.

What have you missed out on in the past two years and think is in urgent need of a reboot? For me personally: a fresh start in my career. And small talk. Do you remember? Standing around somewhere with people you don't even know and spontaneously talking about something meaningless because it just happens at a party. And sometimes it even turns into a great conversation. And no one logs out.

The motto of #rp22 refers to the last line of the Queen song "Bohemian Rhapsody". Which song do you think should definitely be included in a karaoke session at #rp22 and why?
"These Boots Are Made for Walkin'" by Nancy Sinatra.