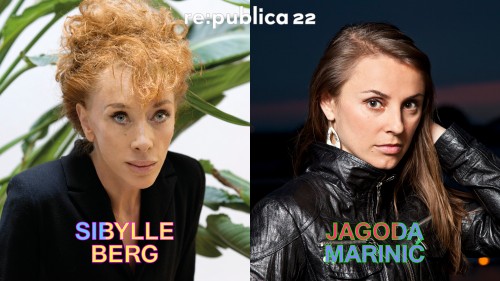 Sibylle Berg, writes novels and plays, works as a co-director and writes travel reports, artist profiles and commentaries for well-known newspapers and online magazines. Since 2013, she also holds a lectureship in dramaturgy at the Zurich University of the Arts.
Her debut novel "Ein paar Leute suchen das Glück und lachen sich tot" published in 1997, directly conquered the literary scene. Even then, Sibylle Berg dealt with doomsday scenarios for the Western world and continued to do so in her 2019 bestseller "GRM. Brainfuck." which she presented with Katja Riemann on stage at re:publica 19. The sequel "RCE #RemoteCodeExecution" has just been published and picks up where "GRM. Brainfuck." ended—in the neoliberal absurdity of our world.

Jagoda Marinić is also a writer and dramaturge. She writes columns for Stern, as well as theatre reviews for the Frankfurter Rundschau, taz and Süddeutsche Zeitung and conducts writing workshops for children and young people. After her debut novel "Die Namenlose" (The Nameless) in 2007, she followed it up with "Restaurant Dalmatia" in 2013 and "Made in Germany. Was ist deutsch in Deutschland?" in 2016, in which Jagoda Marinić explores Germany's identity as a country of immigration. In her 2019 book of essays "Sheroes. Neue Held*innen braucht das Land" (The country needs new heroines) she demands that Germany should no longer be a "guest on the fence in the most important feminist debate of recent decades". In her podcast "Freiheit Deluxe" (Freedom Deluxe), she meets with interesting people every other week to talk about freedom and free spaces.

In a recent episode of that podcast, Sibylle Berg and Jagoda Marinić met recently to talk about things like quantum physics, capitalism, surveillance and uncapitalist love.
For their session at #rp22, we invited the two for a short interview.

What topic will you be discussing at #rp22?
Jagoda: I don't know yet what Frau Berg wants me to say. (laughs)
Sibylle: We might talk about attention theft through algorithms, the feeling of panic, the actual state of the world, its division among fewer and fewer corporations and male shareholders, about the mantra: everyone can make it and what that has to do with desolidarisation and hatred and what the way out of all the catastrophes might be.
Jagoda: What the world needs to be saved from and what is going wrong in the best of all systems? Agreed.

What have you missed out on in the past two years and think is in urgent need of a reboot?
Sibylle: The common feeling of being able to talk to each other, that democracy involves exchange of opinions, argumentation and contradiction.
At the moment there seems to be only one consensus: We hate each other instead of uniting.
Jagoda: Even if it doesn't only concern Twitter: together with Sibylle, I would like to buy this Elon Musk. In order for us to be able to do this, everyone should invest heavily in RCE shares. The IPO is imminent.

The motto of #rp22 refers to the last line of the Queen song "Bohemian Rhapsody". Which song do you think should definitely be included in a karaoke session at #rp22 and why?
Jagoda: Freddie Mercury singing out loud is already very much my thing. But then I would continue with ex-Yugo and Turkish music. Or all the tracks from the compilation Songs of Gastarbeiter—sought, found and recorded by Imran Ataya and Bülent Kullukcu aka AYKU—because everyone in Germany has been so horny over the last 60 years of immigration that they have curiously learned the language of their immigrants and can now party with us.
A little tip: Just sing the vowels veeeeeeeery looooong. Thank you.
Sibylle: I'm also in favour of several songs. First of all, I think it would be fun if everyone did a Kate Bush song, and secondly, the official RCE anthem "Viel Spass" by Faber and Olan!—finally an alternative to "Bella Ciao"!