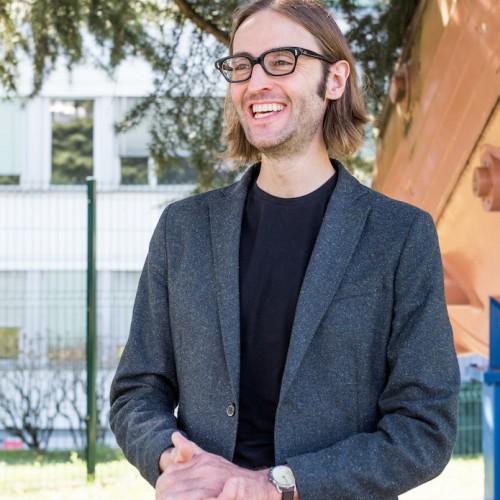 Dr. James Beacham is a particle physicist at the Large Hadron Collider at CERN, where he hunts for dark matter, gravitons, quantum black holes, and dark photons as a member of the ATLAS collaboration, one of the teams that discovered the Higgs boson in 2012. In addition to his research, he is a frequent speaker at popular sci/tech/art events around the world (with a large following on TikTok), and regularly appears on radio shows, podcasts, and in TV series and documentaries. His talk, “How we explore unanswered questions in physics”, was featured on TED.com and has been viewed more than 1.6 million times. Beacham is also an experimental filmmaker and regularly collaborates with other artists.

Decrypting the Universe: A Deep Dive with James Beacham

Info
What's outside the universe? What's inside a black hole? What is dark matter, really? We will ever be able to travel through time? Is our universe made of math? Why do people believe ridiculous things? Why do people think that everything in existence needs to be commodified? How will the universe end? Join Dr. James Beacham, ask-me-anything style.
Space
Wissenschaft
Home Base
10.06.2022 11:00
– 12:00
Meet Up
English
Conference

The Other End of a Black Hole

Info
What would happen if you fell into a black hole? Would you be vaporized? Crushed into a point? Stretched into spaghetti? Or would you emerge at the other end to a new world – perhaps a new universe?
Space
Wissenschaft
Stage 1
09.06.2022 20:00
– 20:30
Vortrag
English
Conference